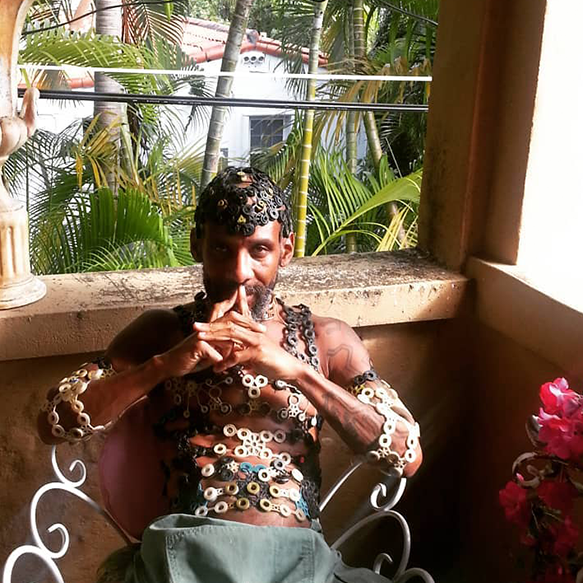 onyxashanti.bandcamp.com/album/node-0-initialization-suite-2013-2019
@onyxashanti
Onyx Ashanti is designing a process for reprogramming himself utilizing his own musical comprehension and sound design, he calls it Sonocybernetics. He believes that musical comprehension of information, grafted into "sonomorphic" structures built within PureData, a Digital signal processing language, will result in thought forms that are more capable of representing higher order thought resonances; a new kind of imagination where thoughts are transduced into data-music, called Metabit and capable of projecting information that is simultaneously understandable as human musical structure and computer data.

Onyx was born in Mississippi and spent his formative years there before going to university at Grambling State to study for a degree in musical performance (saxophone) briefly, then moving to Atlanta, GA in the early 90's and becoming a street busker at Underground Atlanta. This choice of profession allowed Onyx to experiment with various forms of electronic instrumentation, such as the wind midi controller, a sort of digital saxophone, samplers and various synthesizers. A few years later, the evolution to VST synths and effects on the laptop, allowed for many vectors of sonic novelty to be explored. This sonic novelty he called beatjazz and during this era, he lived in San Francisco, LA, London-where he toured with Soul II Soul and recorded with Basement Jaxx amongst many others of the early 2k's. It was in Berlin that he built his first "beatjazz" controller and was instantly thrust into the TED spotlight when they invited him to show his invention to their audience in NYC and online.

Since then, the beatjazz controller has perpetually evolved until it became something not imagined initially; a sonocybernetic perceptual interface for designing novel, iterable sonic thought forms that recast reality projection as binary harmonic structure. The new interface is a bodyware system called sonocyb1 exomesh. He believes the true link between us and our technological expressions should be musical if we are to comprehend the compounded complexity of this age in a way that engenders awe, wonder and curiosity, rather than anxiety at the tsunami of novelty that seems to be cresting over the collective human experiment.

For more check out this interview with Onyx.

Onyx is currently teaching himself to do daily typing and mousing chores using his current exomesh dataskin. He'll share insight related to being in a full immersion state for, by the time of eyeo, approximately 2 months. His youtube updates will keep pace with the process between now and then. His bandcamp page is the sonic diary. In his talk he'll discuss his findings.