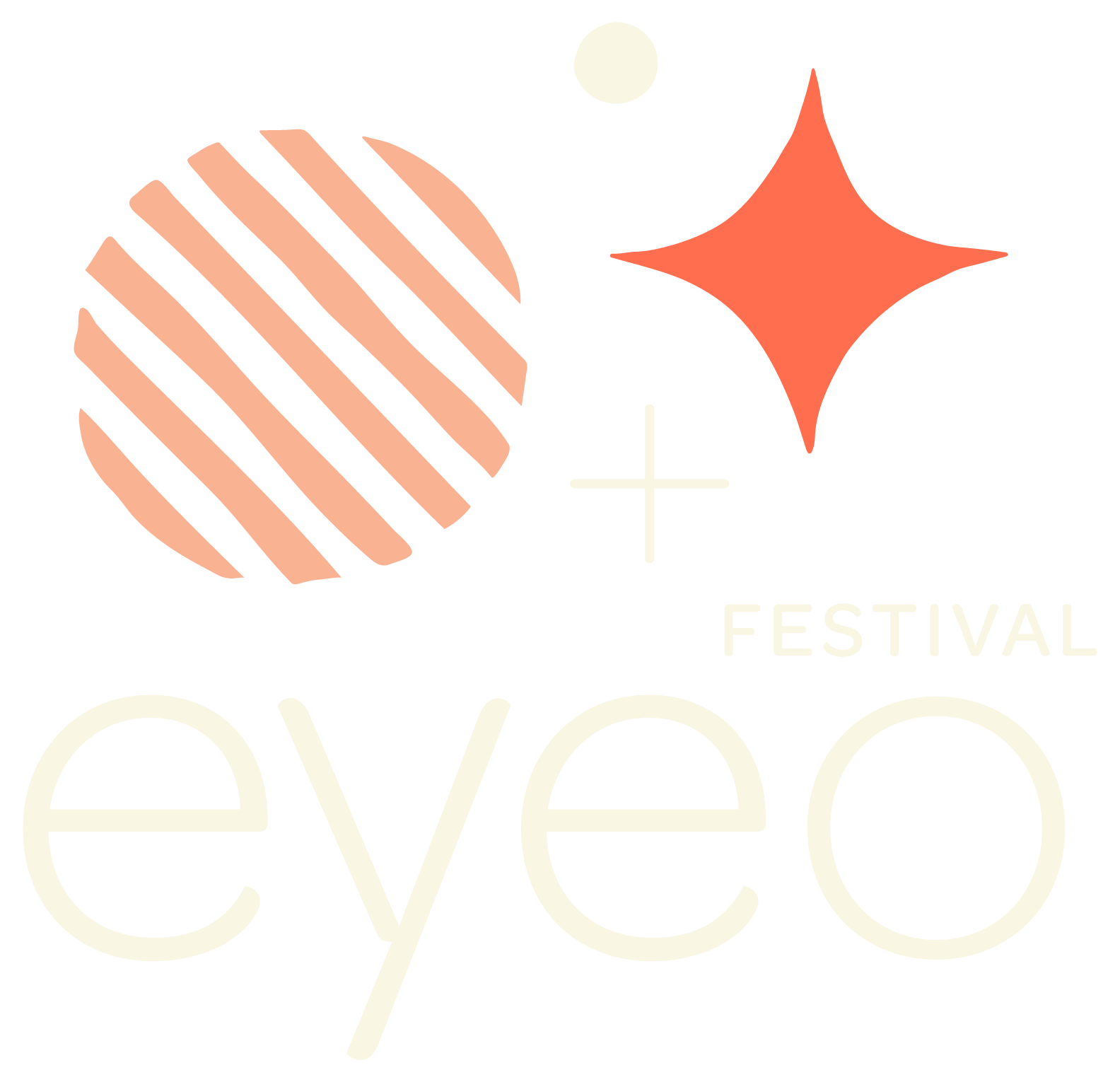 Matt is not a monk, though he seriously considered it. Instead he has spent decades threading together disparate activities such as Buddhist philosophical study, meditation retreat, making queer performance art, founding small companies, crafting open source software and building empowered communities of practice.
flyingzumwalt.com

Chris manages the Knight Foundation's Prototype Fund, dedicated to R&D for early-stage media and information projects. Funded projects range from chatbots to augmented reality apps and leading-edge digital projections. He connects arts institutions and influencers to explore how tech is disrupting how institutions and artists do their work.
chrisbarr.net
knightfoundation.org/topics/arts-technology

Amon enjoys designing, developing, and deploying technological systems that allow novices to invent their own interactions between the physical world and the digital world. He's the co-inventor of Scratch - a programming language for young people. As an Associate Professor of Computing and Innovation at Olin College, he directs the EASE Lab.
amonmillner.com

Mohit is an avid maker who builds free-formed electronic sculptures. These sculptures are an artistic exploration into a world where circuits are freed from their two dimensional constraints and brought into a three dimensional environment.
bhoite.com
instagram.com/mohitbhoite

Sarah is a designer, programmer, and artist. She creates geometric sketches and films and sometimes performs live visuals with a livecode band. In her art, she endeavors to create works that move away from strict data representation, hoping to provide optional takes on the relationship we can have with information in a computer-organized world — one that is less about perfection and completion and more about augmenting our humanity.
art.sarahghp.com

Onyx is designing a process for reprogramming himself utilizing his own musical comprehension and sound design. He calls it Sonocybernetics. He believes the true link between us and our technological expressions should be musical . He’s exploring a new kind of imagination where thoughts are transduced into data-music, called Metabit and capable of projecting information that is simultaneously understandable as human musical structure and computer data.
onyxashanti.bandcamp.com/album/node-0-initialization-suite-2013-2019

Lucianne is an astrophysicist and astronomer at the Adler Planetarium in Chicago. She’s also an artist working in a variety of media, from performance to sound. Her work delves into a question both scientific, and fundamentally human: what is the nature of life in the universe?
tangledfields.com

Adam is an American artist and researcher based in Berlin focused on computer vision, forensics, and counter-forensics. He often explores the impacts of surveillance technologies and engineers methods of camouflage from surveillances such as facial recognition. His work has been exhibited around the globe.
ahprojects.com
mastodon.social/@adamhrv

BUFU's work looks to wage intimacy in a world growing deeply disconnected. Through performance, community organizing, multimedia journalism, and vr they conjure, building pathways from where we’ve been to where we could go.
bufubyusforus.com
instagram.com/bufu_byusforus

Nadieh (pronounced Na-di ) is freelance a dataviz designer whose beautiful, technical and sometimes playful work has been highly visible in recent years. Her work has won several awards and been included in several in publications. She has a degree in astronomy and is based near Amsterdam. Her passion lies with creative data visualization.
visualcinnamon.com

You like magic portals, we like magic portals. Meow Wolf makes magic portals. The Santa Fe based group creates immersive and interactive experiences that transport audiences of all ages into fantastic realms of story and exploration. This includes art installations, video and music production, and extended reality content. Meow Wolf believes in the power of creativity to change the world.
meowwolf.com

Mario is a Munich based artist and skeptic with a desire to understand, question and subvert the inner workings of systems of any kind. He works with artificial intelligence, neural networks, deep learning, generative and evolutionary art, glitch art, data classification and visualization, and robotic installations. His portrait generated by artificial intelligence, 'The Butcher's Son' was recently awarded a 2018 Lumen Prize.
quasimondo.com

Ron is an interdisciplinary designer, artist, and researcher working in the cracks and the fissures. They work across the fields of human geography, digital technology, and urbanism. Ron believes that people should have full access to shaping their cities and communities and sees design and cartography as mediums for moving beyond paralysis in the face of complexity.
elegantcollisions.com

Sara is an Artist, Product Designer, UX Researcher/Designer and Data Visualization Designer who spends a lot of time thinking about how to make complex systems elegant, enlightening, and a pleasure to use. As Senior Lead Designer for the Europa Clipper mission at NASA's Jet Propulsion Lab, she's responsible for software human interface design and system architecture for machine learning for science.
saraschnadt.com

Paul’s practice includes teaching, writing, and experimental publishing, with a focus on queer methodologies and network culture. His 2018 QUEER.ARCHIVE.WORK is an urgent act of publishing that’s radical, messy, and future-looking. He founded the Library of the Printed Web, a physical archive devoted to web-to-print artists’ books and zines (acquired by MoMA Library in 2017). He’s faculty at RISD and curates Rhizome's 'The Download'.
soulellis.com

Stephanie is a transdisciplinary artist who creates platforms for dialog about artificial intelligence as it intersects race, gender, and our future histories. She is particularly driven to work with communities of color to develop AI literacy and co-create more inclusive, equitable artificial intelligence.
stephaniedinkins.com

Diana has expertise in engaging multi-generational, diverse communities in exploring innovative technology solutions. Her work focuses on developing popular education materials that empower communities to use media and technology to investigate, illuminate, and develop visionary solutions to challenges.
Mothercyborg.com
peoplesguidetoai.com

Dan is on a mission to share code with the world. (In a fun, approachable way.) On his hugely popular youtube channel, The Coding Train, he publishes "creative coding" video tutorials every week. Subjects covered range from the basics of programming languages like JavaScript (with p5.js) and Java (with Processing) to generative algorithms like physics simulation, computer vision, and data visualization.
shiffman.net
youtube.com/user/shiffman

Refik’s site-specific large-scale public artworks are a site to behold. Parametric data sculptures, live audio/visual performances and immersive installations– they’re beautiful, engrossing and hypnotic. Embedding media arts into architecture, he questions the possibility of a post digital architectural future in which there are no more non-digital realities.
refikanadol.com

Moritz works at the crossroads of data visualization, information aesthetics and user interface design. He lives and breathes it. His work balances analytical and aesthetic aspects in mapping abstract and complex phenomena. He also co-hosts the DataStories podcast where he talks shop with leading data viz practitioners from around the world.
truth-and-beauty.net
instagram.com/moritz_stefaner

Sasha is a scholar, activist, and media-maker, and currently Associate Professor of Civic Media at MIT. Their work focuses on social movements, transformative media organizing, and design justice. They lead the Collaborative Design Studio, based at MIT with partners in multiple locations, which generates civic media projects that are grounded in real-world community needs.
schock.cc

Nicole is fascinated by the transitionary state humanity has found itself in, where the boundaries of digital and physical, virtual and real, having only just been established, are almost immediately washing away. Her work lives on this tenuous divide, confusing the notion of a render and a photo, handmade and computer-fabricated.
nicolation.net
instagram.com/nicole.aptekar

Mike is an interactive director whose work explores the space of interactive arts and music. He hopes to encourage the next wave of spatial designers to question our expectations of media, and the opportunity we all have in designing a mixed reality future. He currently works at Magic Leap and recently produced the audiovisual experience Tónandi with Sigur Ros. Previously he worked at Universal Everything and produced multimedia experiences for the likes of Radiohead and Kayne West.
mike-tucker.com
magicleap.com/experiences/tonandi

Lauren’s art examines how surveillance, automation, and network culture affect our social relationships. Her work has been exhibited internationally from Ars Electronica to the Barbican to the Seoul Mediacity Bienniale. She is Co-Director of the Processing Foundation and the creator of p5.js, an open source language for learning creative expression through code online.
lauren-mccarthy.com

Hannah’s practice is centered in AI, particularly through data sonification, natural language processing, and generative music. For a few years now she’s been working on an algorithm called TransProse , which identifies emotions in a piece of text and translates it into a musical piece with a similar undertone.
hannahishere.com

Nathan has a PhD in statistics with a dissertation on personal data collection and using visualization in an everyday context. He's the force behind [the essential] FlowingData.com blog which explores how statisticians, designers, data scientists, and others use analysis, visualization, and exploration to understand data and ourselves. He’s authored of two best-selling books ‘Visualize This’ and ‘ Data Points’.
flowingdata.com