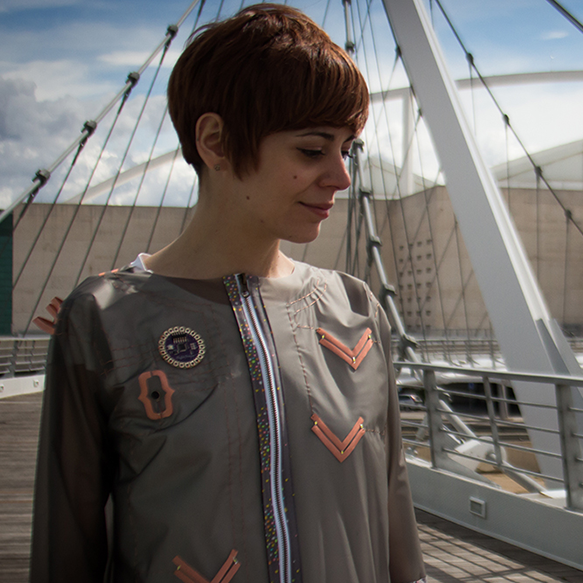 afroditipsarra.com
@afroditi_stereo
Afroditi Psarra is a multidisciplinary artist working with e-textiles, diy electronics and sound. Her artistic interest focuses on concepts such as the body as an interface, contemporary handicrafts and folk tradition, pop iconography, retrofuturistic aesthetics and the role of women in contemporary culture. Her artworks include a wide variety of media and techniques that extend from embroidery, soft circuits, hacking and creative coding, to interactive installations and sound performances.

She holds a PhD in Image, Technology and Design from the Complutense University of Madrid. Her academic research Cyberpunk and New Media Art focuses on the merge of science fiction ideas and concepts with performative and digital practices, and offers a philosophical, sociological and aesthetic analysis of the influence of new technologies in the contemporary artistic process. She's an assistant professor in the Center for Digital Arts & Experimental Media (DXARTS) at the University of Washington, Seattle. 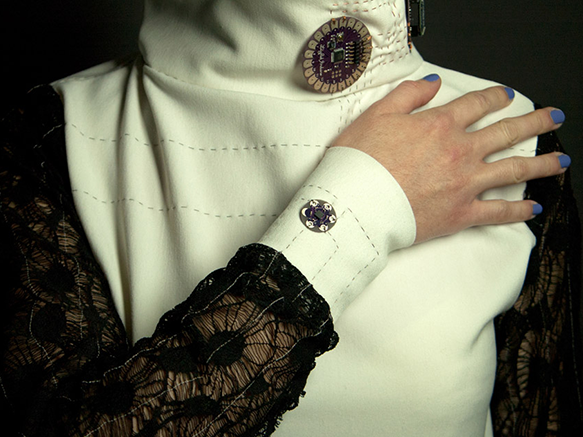 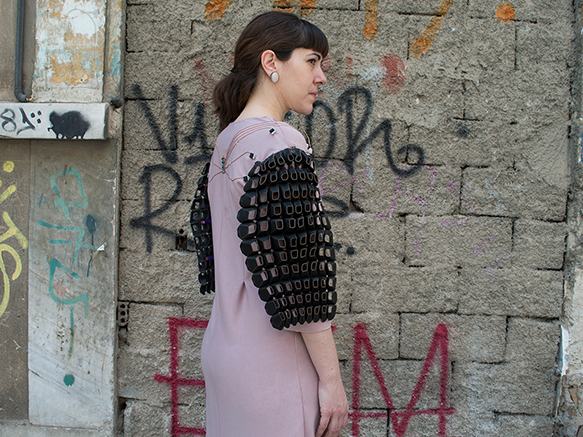 Ubiquitous computing, the Maker movement and the Craft Revival gave rise to a generation of e-textiles practitioners coming from different fields (art, design, engineering, physics etc) that explore art and science by experimenting with wearable technologies. Can the idea of hacking the body trigger new scientific research or tactical methods of resistance? Could e-textiles be used as an educational tool to raise awareness towards the massive production and consumption of technology?

The workshop encompasses the idea of intersecting science and art through e-textiles and wearables, by creating handmade technological artifacts that can sense electromagnetic fields. After a brief presentation of reference projects and technologies that would be used, the participants will experiment with two different circuits. One acts as an amplifier that can pick up LF transmissions and make them audible. And the other, an ATtiny85-based detector, provides sonic, haptic and visual feedback of the picked-up interference. Furthermore, the participants will explore the concept of fractal antennas and will create their custom wearable EMF detectors.

Electromagnetic fields are everywhere and this workshop provides the basic tools for sensing the invisible universe that surrounds us by providing sonic, haptic and visual feedback on our bodies. The wearable detectors that will be produced at the workshop can be used in a number of ways - as an open-source tool to explore the city’s invisible landscape, as an audiovisual performance interface or as a way to collect EMF data that can afterwards be used for further analysis and experiments (e.g. visualisation or signification). Plus, according to Nicolas Collins in his hardware hacking bible Handmade Electronic Music: “If you get far enough from civilisation’s ubiquitous 60/50 Hz hum, you may be able to pick up the Aurora Borealis, “whistlers” induced by meteorites self-immolating as they enter the earth’s atmosphere, the pipping of GPS satellites, or top-secret submarine radio communication.”


WHAT TO BRING:
Laptop
Headphones
Tiny AVR programmer (if you have one)
A piece of clothing you would like to hack.


WHAT SOFTWARE TO HAVE INSTALLED:
Arduino (version 1.6.x or higher)
ATtiny boards (version 1.0.1 or 1.0.2) by David A. Mellis - can be installed from the Boards Manager in Arduino.


NOTES:
It will certainly helpful to be familiar with Arduino coding and to have soldering and/or crafting skills. However they are not necessary prerequisites.